I’ve had more than my fair share of injuries while riding my bikes. With mountain biking you’re going to crash, cut your shins or go full over the bars.

On a cold January in 2010, the trails slippy with below freezing temperatures and the mud was rock hard. My friend and I were heading back from the far end of The Monkey Trail on Cannock Chase. We’d ridden the trial tens of times over the years but this time something went wrong.

There is a wooden boardwalk – or “north shore” as it’s known – which you ride on to out of the tree cover. There is a slight kink and a small step. I must’ve washed out and trapped my foot in-between the edge of the raised section and the hillside. As momentum carried me along, with my foot trapped, it twisted and disclocated my ankle.

I can vividly remember exactly where I came to rest, but I couldn’t piece together how I got there. I was facing up the trail, slightly down the hill but behind two trees. There I noticed my ankle was facing the wrong way so decided to stay put.

Luckily the next two people on the trail had emergency blankets and called the paramedics. Everyone who went passed slowed down and asked if I was OK. My friend – after waiting for a long time at the bottom of the trail – decided I wasn’t that slow and headed back up to find out where I’d got to!

At one time there was talk of a using a helicopter due to my position in the woods, but alas that wasn’t required in the end. I was carted the hillside in a six-wheeled off-road buggy which the stretcher didn’t quite fully fit into – my legs out in the overhang. To this day I’ve never been in a helicopter.

A trip to hospital

I had a ride in an ambulance with the “blues and twos” blarring, and arrived at Stafford County Hospital. A friend brought me something to read; a mountain bike magazine! Diagnosis was a disclocated and fractured ankle which would require surgery. I went in for surgery the next morning and then back to the ward. The pain was far worse than before the operation and it took me a few days to cope with the pain. 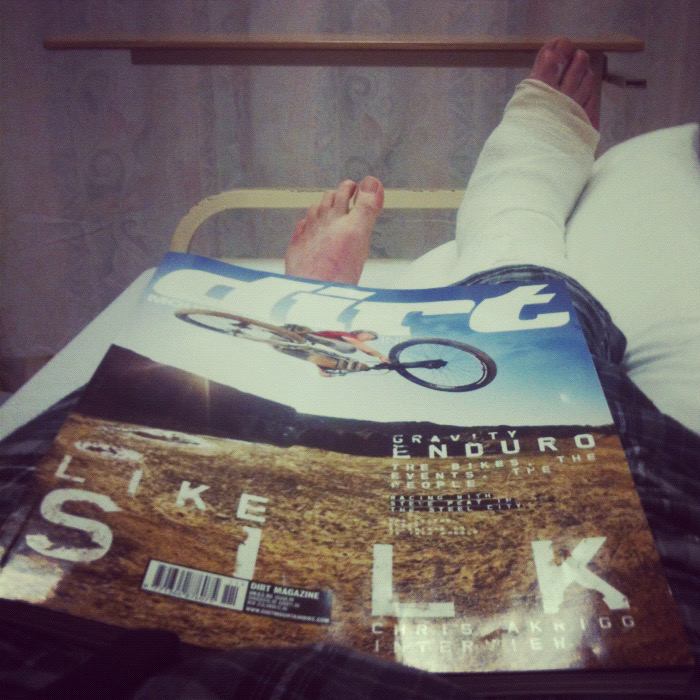 I eventually left – with extra metal holding my ankle together – to start my recovery at my family home. My mother, who had worked in a hospital all her life, had retired a week earlier, now has one last patient.

It took around three months to recover, which included another surgery to remove the pin holding my ankle together. There are strong memories of pain when standing up, nausea when they revealed the stitches from the surgery and the weakness and stiffness when beginning physical therapy.

However, I couldn’t wait to get back on my bike…