Following on from my previous movie summaries, this is my May review. Overall, I watched 30 new movies this month, taking the total for the year to 158! 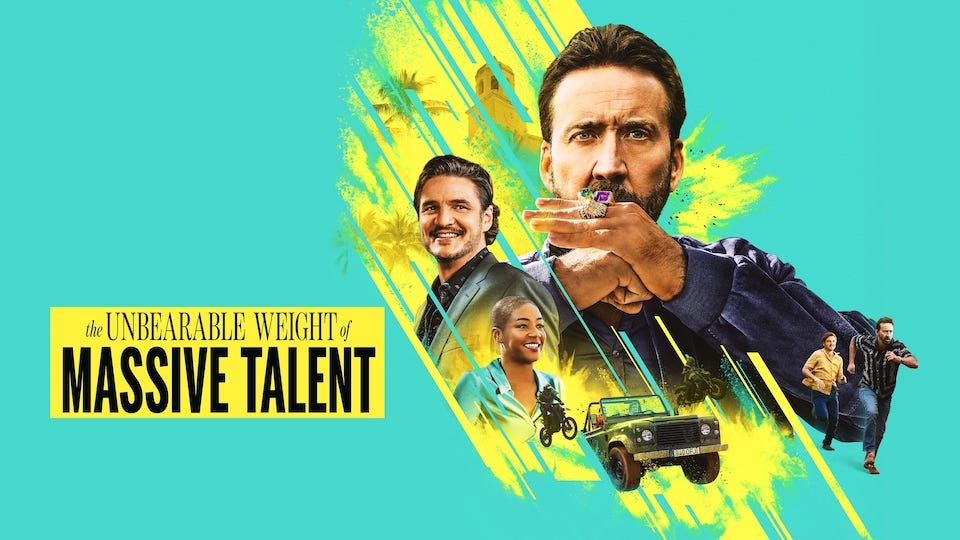 Nicolas Cage stars as Nick Cage in this incredible self-referencing satire. The Unbearable Weight of Massive Talent is a fun flick with great action, and cool charisma from both Cage and his superfan played by Pedro Pascal. It was an absolute blast to watch, with incredibly beautiful cinematography parred stupid interplay between the two protagonists.

As Above, So Below is a "found footage" horror that I had little knowledge or expectations about. After an action-packed introduction, a brisk setup introducing the characters and their quest, it moves down to the catacombs underneath Paris. Similar to The Descent, it uses the claustrophobic setting to great effect. This is combined with a great telling of Dante’s Inferno 9 Circles of Hell allegory and creepy characters it has genuinely frightening moments. Running at a brisk 90 minutes, it uses every inch of its runtime to fantastic effect.

The Lost City is a very stupid action movie that is great fun to watch. Sandra Bullock and Channing Tatum have amazing chemistry and pull off some hilarious physical comedy. The movie is filled with great lines, outrageous characters and silly action, much like Disney's Jungle Cruise. I hope there will be a sequel.

Doctor Strange in the Multiverse of Madness is the 28th movie instalment in the Marvel Cinematic Universe (MCU). Directed by The Evil Dead director Sam Raimi, it takes a lot of cues from the horror-maestro and feels a lot darker than previous movies. After so many superhero movies, especially those that all tie together such as with the MCU, many blend into an entertaining yet bland blur. This sequel has a distinctive style and fun fan service thanks to the multiverse freedom. Although it has a rather rotund runtime, it's a good addition to the series.

Thoroughbreds is a strange unconventional movie. It's quite small in scope, with the two main protagonists, played by Anya Taylor-Joy and Olivia Cooke, conspiring to murder. There is great cinematography and lingering long takes combined with minimal sound design occasionally punctuated with great use of soundtrack. The violent undertones are only implied but manage to convey the creepy story convincingly.

Nine Days is an interesting story with intriguing ideas. After one of his previous interviewees dies, a man interviews for a human soul to be born. He wrestles whether he made the correct decision while deciding on a new soul. It dares you to take note of small moments, like feeling waves on your feet or cycling. Each performance adds uniqueness and ponders provocative questions about humanity.

Headhunters is a fun Norwegian thriller. A boring middle manager with a penchant for stealing art finds himself way out of his comfort zone after a mark becomes his predator. As things start to go wrong, they snowball into worse and worse situations. There are so many memorable and unique scenes, from a tense stand-off to a car chase, but especially the outhouse and dog! There are twists, turns and double-crossings. Definitely worth watching for the ride.

Winter on Fire: Ukraine's Fight for Freedom is a documentary movie about the people in Ukraine protesting for their freedom. Starting with peaceful protests, it soon delves into courage and attrition with police aggression as tensions escalate. The movie covers the amazing determination of ordinary democratic men, women and children literally fighting for their lives. It's even more reflective because of their ongoing struggle today.

Ridley Scott is best known for is epic blockbuster Gladiator (2000) and his sci-fi classics Alien (1979) and Blade Runner (1982), among many more. More recently he directed the acclaimed The Martian and brutal medieval movie The Last Duel. I watched four movies he directed that I hadn't seen before;

I had heard mixed reviews of House of Gucci, Scott's second movie released in 2022, but the all-star cast was difficult to ignore. Lady Gaga (A Star Is Born) is paired alongside Adam Driver (The Force Awakens), with Al Pacino, Jeremy Irons and Salma Hayek in supporting roles. But is it the unrecognisable Jared Leto who provides the most bizarre performance. Based on the true story following the family feud's behind global fashion brand Gucci, the screenplay is overly long and too absurd. There are many eccentricities, with back-stabbing and poor decisions at every turn. It's well produced but lacks any sparkle. It falls into a middle ground between satirical comedy and serious drama, but even with Ridley Scott's talent, it doesn't work.

All the Money in the World is a movie that was thrust into the spotlight due to recasting a lead character after the movie was complete. That aside, this is another Scott movie set in Italy during the 1970s, that revolves around money and is based on a true story. The movie exudes craft, with beautifully captured moments of cold torment surrounded by warmth. There are a few problems with pacing and some issues with melodrama, however, the story builds well, with increasing turmoil yet with a very benevolent undercurrent. Well worth a watch, it is a much better movie than House of Gucci.

I'm not a massive fan of sword and sandals biblical epics, but Exodus: Gods and Kings features an incredible cast (Ben Mendelsohn, John Turturro, Ben Kingsley, Christian Bale, Joel Edgerton, Sigourney Weaver) that piqued my interest. However, except for Bale and Edgerton, everyone is severally underused – especially Sigourney Weaver who barely says a word. Ben Mendelsohn and John Turturro both play their role with a camp fun-ness. Between the first battle and the plagues, the story stumbles and loses its momentum. Overall, it was better than I expected, with common Egyptian themes presented in an accessible way. The epic scenes are gorgeously framed and the cinematography is beautiful throughout.

The final movie was A Good Year. Switching Italy for France, Scott seems to have a predisposition for stories about men corrupted by money. However, this is a much more light-hearted affair, of a cold-hearted man warming to the relaxing life on a French vineyard. Fond childhood memories, a love interest and a lot of crude unsubtle innuendo make it an easy watch. Powerhouse actor Russell Crowe is front-and-centre in a rather unfamiliar role but Marion Cotillard is sadly underused.