Probably the most competitive segment of iPhone application market is gaming. There are thousands of games available for the iOS touchscreen platform, yet there are only a handful which are well designed, make good use of the touch interface and have good (and addictive) gameplay. Some of the best games are well known, due to exposure on Twitter, Facebook and then word of mouth, but some worthy additions go under the rader. Below are some of my favourite games, starting with probably the most successful of them all, Angry Birds.

Angry Birds is the must have game. The game is so simple, quick and easy to pick up but extremely addictive. It is easy to start a "quick" game, when you're waiting for something, but very difficult to then put done. The best type of "one-more-go" game you'll find on the iPhone — if not anywhere. 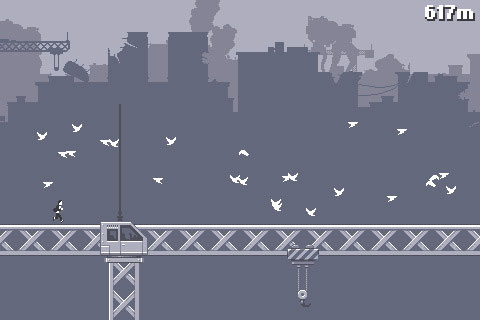 Canabalt is such a simple game, featuring only one level, one life and all the gameplay involves is jumping by tapping the screen. Easy, but addictive. The retro graphics and soundtrack are uniquely appealing and suits the game perfectly. Another great example of the best type of game for the iPhone — really easy to pick up and play (but also suffers from the "one-more-go" syndrome).

Orbital is an interesting puzzle game where you score points by destroying orbs. Fire to create the orbs then hit them multiple times to make them explode. The game features different modes; gravity, pure and supernova, each of which add a unique spin on the gameplay.

Doodle Jump was one of the first games I purchase. A very simple concept, you play the by tilting the iPhone left or right to move a weird looking alien, bouncing him off platforms, enemy aliens and collecting power-ups. You must keep the critter on the screen to keep the game going. Again, very easy to play but difficult to stop playing. 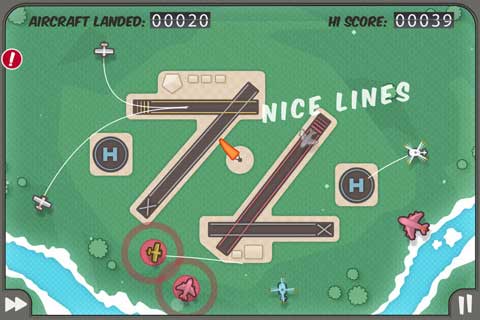 Flight Control is a superbly drawn strategy game which is described as "as simple as it is wickedly addictive" – a statement which I can heartily agree with. Touch and drag aircraft to their correct landing zones to score points, but it's all over if they crash. The game feels easy when you first start but soon becomes difficult to manage everything as you try to concentrate on more and more aircraft.

Fling is a simple puzzle game. Flick any of the fuzzy characters in to each other until only one remains on the screen. Simple to start off with, but it soon gets challenging — a good game to get your brain going!

Pix'n Rush Love is a hectic platformer that I installed after high praise by gamer Matt Brett. Using simple on screen controls you must guide the main character to collect coins and shoot enemies all set to a very retro graphics. 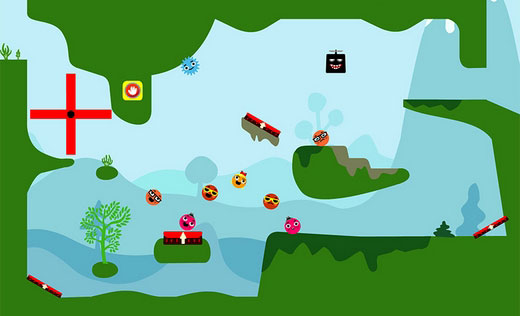 Rolando and Rolando 2 are two unique platform games. Tilt your device left and right to control, roll, and jump the little round characters to safety. Hugely cute 2D game with amazing level design, animation and sound.

Monkey Island: SE is an iOS port of LucasArts' The Secret of Monkey Island, the best point & click adventure ever made. Re-live the swashbuckling adventures of Guybrush Threepwood in either old-school or "special edition" graphics which also features fully voice-acted dialog and all the puzzles you can throw your stick at.

If you are a classic point & click adventure connoisseur then you might be pleased to know that Monkey Island isn't the only game which has been ported to iOS. There is a remastered version of Beneath a Steel Sky, Simon the Sorcerer and the sequel Simon the Sorcerer 2 and Flight of the Amazon Queen. Although these games are all amazing, I don't think they suit the environment you are usually in when wanting to play a game on your iPhone or iPod Touch. Point & click adventure games require time and thought to work out the puzzles, something which I rarely have when I'm looking to kill five minutes.

I am looking forward to Mimeoverse: Mimeo and the Kleptopus King, a platform game by Shaun Inman, in which the levels are built around four different classic gaming resolutions; 2bit, 4bit, 8bit and 16bit graphics (the latter three based on the Gameboy, NES and SNES respectively), taking you back through your entire childhood gaming catalogue. Check out this awesome artwork: 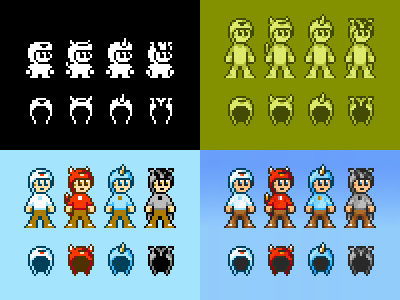