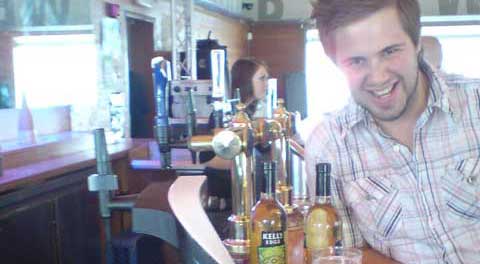 The Multipack had it's first anniversary last weekend and overall the event was pretty successful. There was about twenty people in total, including some new members as well as the regulars. Half of the founding members were at this first anniversary, Chris Lysaght entertained with his stories and Si Jobling (the founding father) gave a quick speech before the cake and free wine was distributed! Paul Lloyd, is now living the Web2.0 life over in Silicon Valley, California, so we'll let him off and Jon Roobottom the Multipack logo designer was no where to be seen! The event was the first proper 'multinational' meet, with Kate (a regular) originally from the USA, joined by Leevi Graham all the way from Australia.

The event started out in the Wharf 10 bar at 2pm in Walsall, the town which held the first event last year. We left the Wharf after the sunset over the industrial chimneys and headed in to the town. A group of us grabbed some grub and talked about politics, the Daily Show and even some web-related topics. Finally, most of the group parted company around 9.30pm. So, go check out some of the photos on Flickr and what the others who attended have to say on the Multipack blog post 'The Multipack Is One'.

Hot on the heels of this event, the next meeting has already been organised. The next meeting is on Saturday 11th November 2006, starting at 2pm. The venue is the Lloyds No. 1 bar in the Broad Street area of Birmingham, UK. You can find about more information about the even on Upcoming, remember to add yourself if you are planning to come!