In my previous post about the Gran Turismo 4 photo mode I stated that I was slightly disappointed by the lack of race situations, but still thoroughly impressed at the output quality of the images. I've had some time to play with the game a little more (currently on 29% completed) and I've found some features I missed before.

I've found the area where you can take photos on the circuits. However, my statement about race situations still applies – you can only take photos with your car on the track. Although this is slightly disappointing, it can still lead to some fantastic photos. And I mean absolutely phenomenal quality images.

I had some fun with a blue Renault Clio Sport V6 on the Infineon Race track, a new circuit for Gran Turismo 4. Below are some of the "photos" I've taken from the replay of one lap. 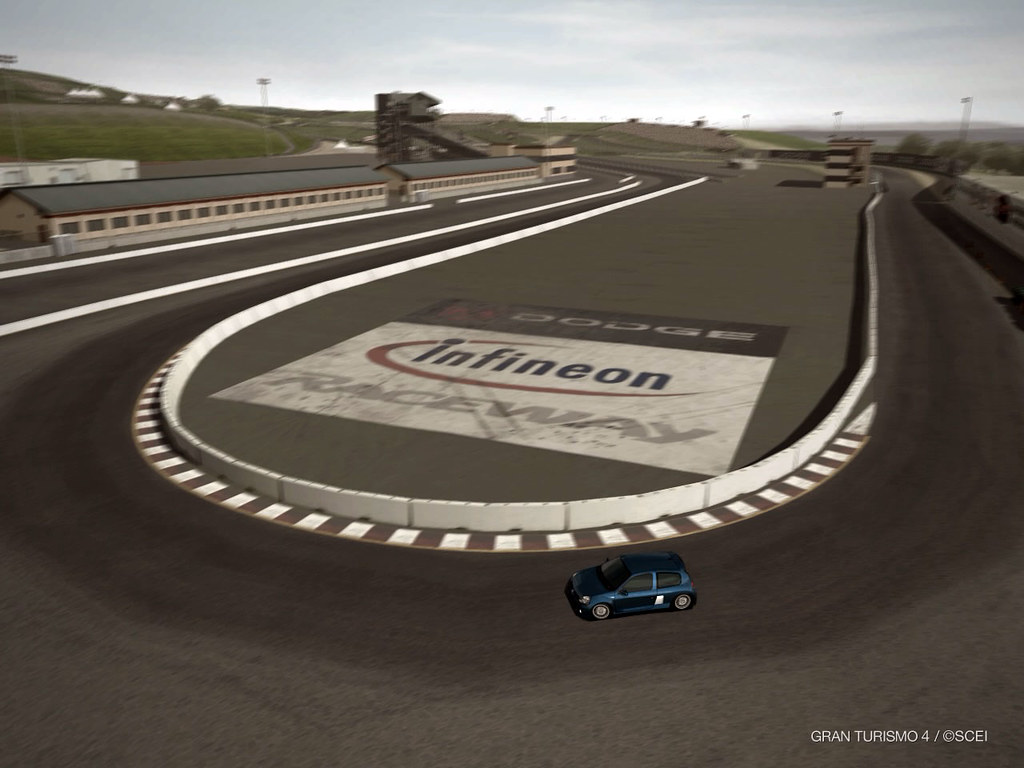 A long shot of the final 180 degree sweeping bend at the Infineon race track. The Renault Clio is situated at the bottom. The photo has a "warm" effect which I added in the photo mode on the game. 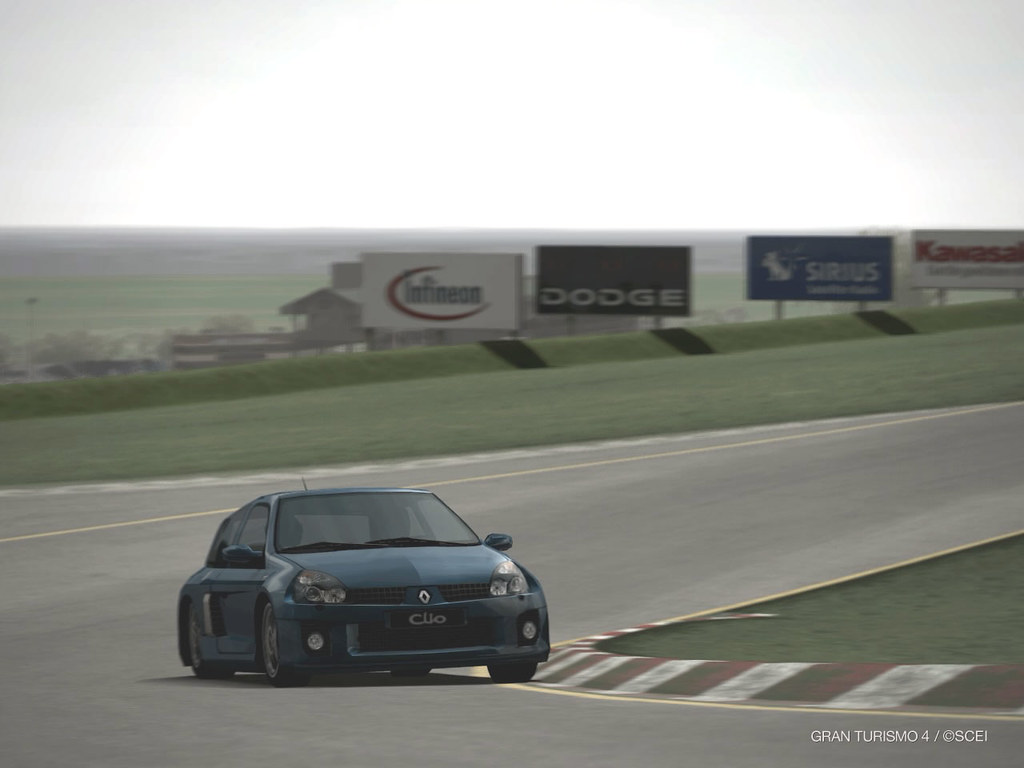 A medium distance shot of the Clio as it clips an apex and rumble strip of a corner. Notice the physics of the game cause the car to roll slightly.

Along The Rumble Strip

A relatively close shot of the rear and side view of the Clio as it drives along a red and white striped rumble strip. Lush green grass and blue, cloudy sky make up the background.

A profile view of the Clio just seconds after it has hit a cone. Fly cone, fly! (I hit the cone on purpose.) 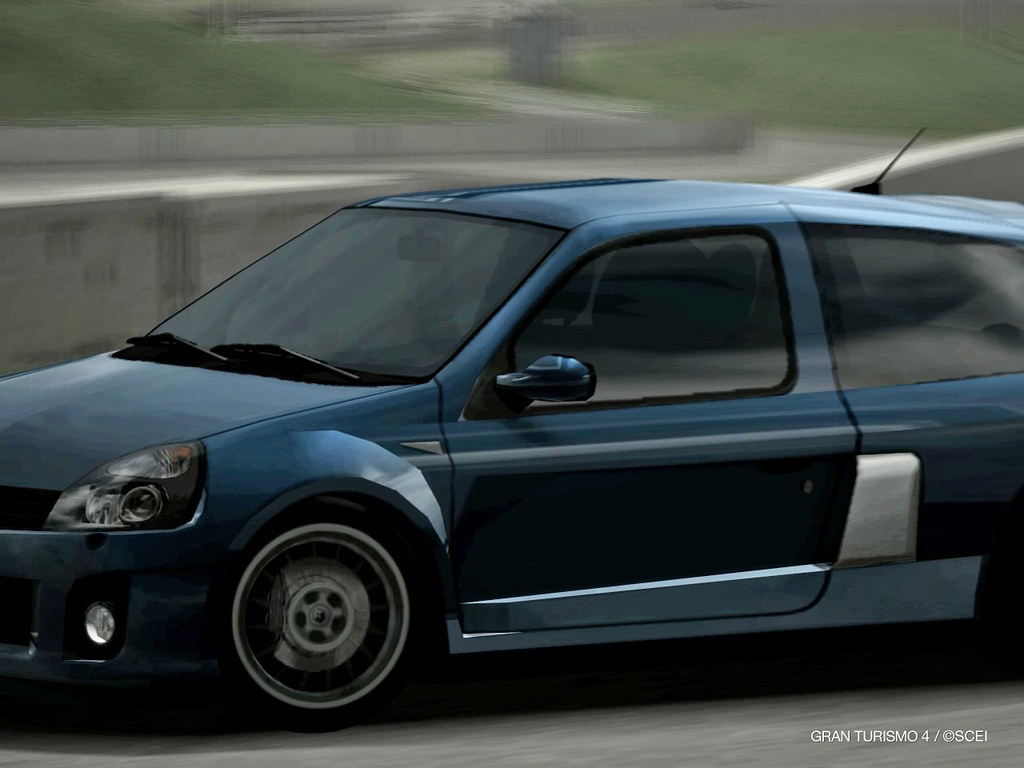 A zoomed in shot of the Clio. Purposefully missing out the very front and rear of the car. The background has a natural motion blur effect.

These shots show some different aspects of the game – the physics as the car rolls around corners and over rough ground. The other aspect which is clearly apparent is the level of detail that has been put into the cars and the beautiful and vibrant colours used in the scenery and the attention to detail of the background.

Below is my favourite shot I took from this replay. The first is the original, the second is in black and white and the third has the background in black and white but the car is still in its original blue colour. The second two images were generated in Adobe Photoshop, not from within the photo mode on the game itself.

The photo mode is fun and you can achieve some stunning effects, especially with some after work in Photoshop, however, it's not perfect. Again I'll complain about the lack of "combat/race" situation ability in the photo mode. I don't think it would have taken much to apply the photo mode to the replays of the races. If there was the option for taking photos during the automatic replays after races, photos could be generated more easily and would certainly appeal to more people. It would also lead to a lot more interesting photos, which would show off what the game is all about a lot more. The photos generated all seem to be a little dark to me, for this reason, I've lightened all my photos up slightly. A bit of a chore but worth it to properly show off the stunning visuals.

Lastly, I'd like to see some improvement in the actual replay mode. To generate a photo you have to press the select button, however, you may just miss the exact point you were aiming for. A little enhancement of the replay mode which added "slow-motion" and rewind/fast-forward capabilities would make the experience a lot more enjoyable and user-friendly.

I hope you enjoyed the photos. No doubt more will be coming soon.