Harry Potter And The Prisoner Of Azkaban

The game was fun to play with numerous different tasks to complete. First of all there are 3 unique tasks, one for each of the main charaters, Harry, Hermione & Ron. The tasks explore a different spells each fairly different, showing a range of different gameplay. Once the three main tasks were complete, each of the characters could progress onto the final challenge. A shorter, but more difficult final "exam" in their specific spell. These exams were fairly straight forward but more engaging than the 10 shield task.

Within these tasks you had to collect a total of 10 shields. However there were secrets and other goodies to search for. Then there were three other tasks to complete. Two of these were pretty similar, defeat the baddies, however there was a fun and challenging flying course to complete. Finally there were 80 collectors cards to find, passwords hidden areas, numerous secret areas.

The game was very slow in loading, taking a couple of minutes between loading screens. This became extremely annoying. Another bad point was, once you started the unique tasks, you had to complete them. Even though you may have found the last shield or secret you had to complete the task again. I found this annoying as I just wanted to check whether I had collected everything. But to find out I had to enter the task strong complete it. 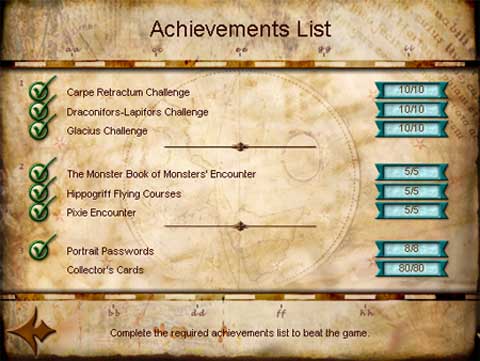 As you can see from the screenshot above I completely finished the game, even finding all the collectors cards! The game wasn't hard, pretty easy infact, as no doubt it's aimed at the younger generation, but it was still pretty fun.